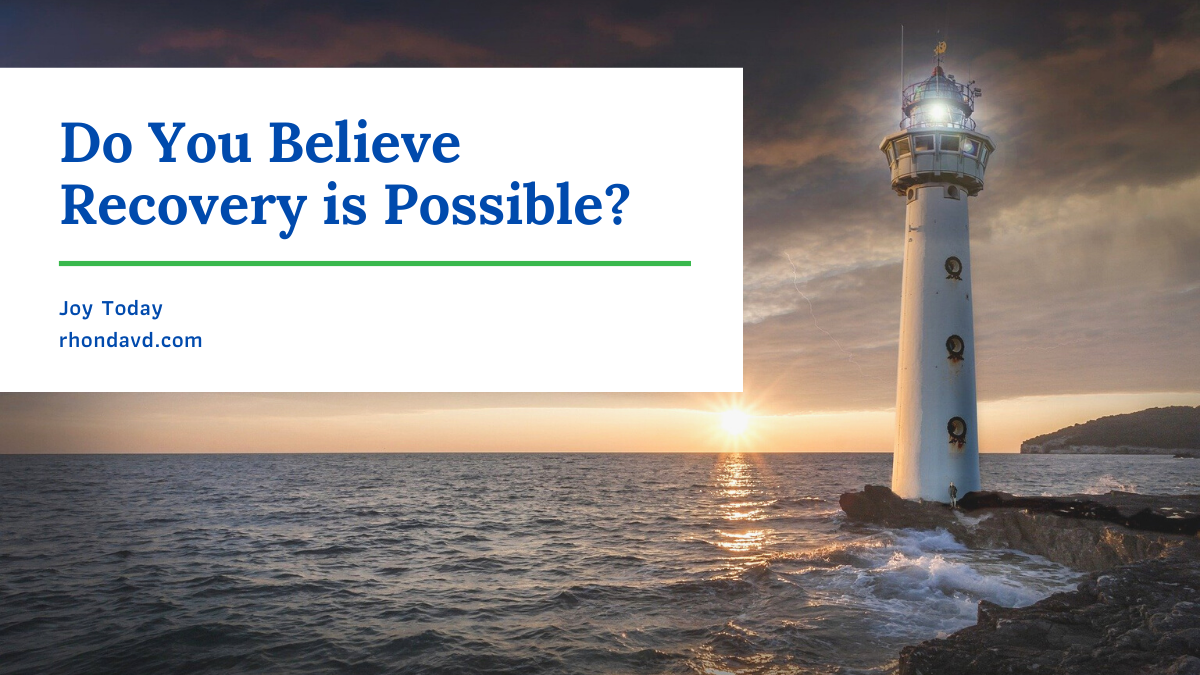 “Do you believe recovery is possible?” she asked me.

I looked her in the eyes, chose my words carefully and responded with confidence, “I trust that God will heal me. I have no doubt that he can help me fully recover.”

She exploded.  Her face radiated anger, and she could barely form a complete sentence to reply.  After all of her years suffering from her eating disorder, the relapses, the different treatment programs, her stolen life, she was angry at me for even daring to say that God would heal me.  Her history had taught her that an eating disorder never leaves, that it always comes back, that it would be something she’d have to deal with for the rest of her life.  She had no reference for belief that recovery was possible, and I think she resented the fact that I would dare to defy her own experiences in a God that had let her down too many times to count.

She walked out of the coffee shop without saying another word, but I could only feel deep sadness for her because I understood completely where she was coming from.  You can only truly understand that which you’ve experienced.

An eating disorder is a seemingly hopeless disease.  It sucks the life out of a person, stealing moments, stealing years of full living, robbing what was once a vibrant personality.  ED is a cruel master who demands utter devotion and attention, who becomes jealous when anyone or anything takes precedence over his needs and desires.  ED is the epitome of a joy stealer.

Yes, I believe because I did.  I will never go back to ED.  Never.  It’s not an option.  I know people relapse.  I relapsed myself so I know the sneaky snake that is an eating disorder, slithering under the surface until it’s fully wrapped around its victim.  I know that because I experienced it.  The first time, I didn’t truly let go of my fear of ED.  And so he didn’t let go of me.  I gave him the power to come back. I did that, not God.

But now I believe.

I believe that recovery is possible because God is more powerful than Satan.  I will never say recovery is easy.  Not to anyone because that is a false sense of security.  Recovery is sweat and tears.

Recovery is possible because God is stronger, BUT, he never said I could sit back while he cleaned house.  I had to work for it too.  I had to fight tooth and nail for every inch of freedom.

I had to let go 100%.  Even a thread of doubt in God’s ability to help me recover would have left a crack in the door for ED to slither through.  I believed because this time I slammed the door in ED’s face and refused to leave him a key.  It’s scary as hell, but I let go.

I got mad.  When I began going to the groups and classes in my treatment program and began realizing exactly what ED had stolen from me – my social life, my freedom of choice, my joy – I got angry.  Not at God.  He didn’t hand my life over to ED.  Satan used my weaknesses to trap me, and so to him I directed my anger.

I hated ED, and I believe that was a hate God gave me against this darkness.  Hatred for ED made me strong in the fight for freedom.  I let go so God could fight for me, and God gave me a righteous anger to fuel my desire to be fully rid of ED.  And that is right and good.

I celebrated every victory.  I didn’t focus on “being recovered”.  I came to the realization that recovery was a process. I had to be okay with being in the trenches, okay with fighting day by day, sometimes moment by moment.

I had to be okay with being uncomfortable.

I learned to celebrate those moments of victory rather than waiting to celebrate the full recovery.  Because let’s face it.  I never woke up one morning and said, “Okay, I’m all better. Moving on.”  The process brought me to today, and so I embraced the joy when and where it came.

Eating a cheeseburger for the first time.  Feeling pretty in flowy dresses and leggings.  Stepping off the treadmill at 27 minutes instead of compulsively running until 30.  Going out for lunch with friends and ordering freely.  Playing with my boys instead of going for 2 hour power walk.  Making lasagna and eating it with my family.  Enjoying the treats in the teacher’s lounge with my colleagues.

I let go, I got mad, and I celebrated each victory.  I embraced the process and leaned into God’s power and grace.  I knew I would recover because it’s the only option I left available.  I surrounded myself with community.  I let myself be vulnerable in asking for help.  I lived aware of Satan’s triggers over me.

Did I have hard days?  Plenty.  Did I wonder when this would all be over?  Often.  Did I get depressed at the unfairness of having to fight this disease?  Many times.

God never promised an easy life. He promised eternal life.  He promised that in this life we would have trouble, but that he has overcome the world.  Victory is not only in the end.  It’s in the fight, in the obedience, in the faith we hold in an omnipotent God.

Take heart, God has overcome.  Letting go has to be all or nothing.  In all things, we trust in the God who loves us, who fights for us, and who says, “I am the Lord your God who takes hold of your right hand and says to you, Do not fear; I will help you.”

That is where we find our Joy Today.

2 thoughts on “Do You Believe Recovery is Possible?”