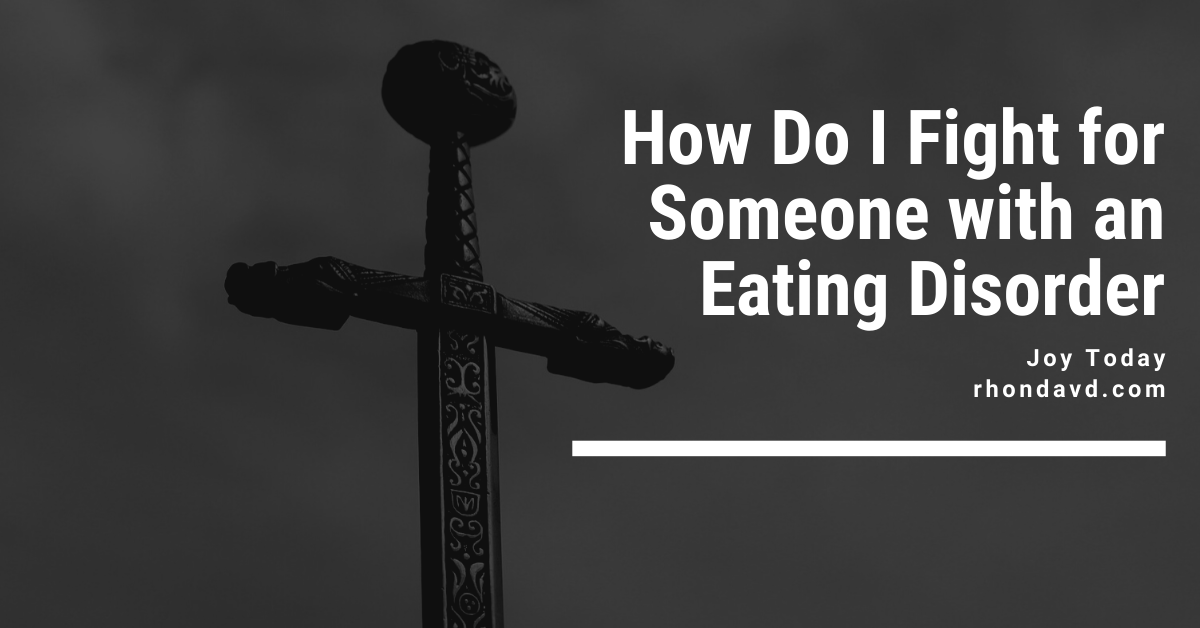 You are the ones who love. You see the destructive behavior and the illogical decisions. You watch the one you love slowly disappear. And you don’t know what to do.

And you ask, how do I fight for someone with an eating disorder? How do I be their one?

My husband was my one. For our first 13 years of marriage, he had to watch the girl he knew slowly fade into the background. He tried to pull me back, but I ignored him, fought him, told him he was imagining things, promised him I was fine, made him feel like he was the one with the problem, yelled at him, tried to pretend with him, hid things from him, and lied to him.

Why the Fight Is Hard

An eating disorder is a jealous disease. He wants priority. He will do anything to be number one. He changes a person into who he wants them to be, so that all they do is for his desires, his happiness, and his ability to thrive.

So the fighting, ignoring, anger, lies – these are all ED speaking above the one you love. He is like the alien in the movie Aliens – he invades the body and takes over. You see the face of your loved one, but you hear the voice of a monster.

The Struggle in Fighting ED for your Loved One

I recently spoke to a mom whose daughter fought an eating disorder. Ella’s daughter won the fight after 3 years battling the disease, but Ella still remembers the fight, and she remembers the monster.

She remembers asking, how do I fight for someone with an eating disorder?

Like my husband, Ella just wanted someone to tell her what she was fighting. She had a hard time finding resources and the help she needed. My husband Benj had a friend who was a nutritionist who helped him understand that what he suspected was not right was in fact not right, but still, he struggled to know where to go next as well.

Who do you go to for help?

Where is this help found?

What is the best course of action?

Can we just fight this on our own?

Will any counselor be able to help?

Are there people who specialize in eating disorders?

When the disease becomes a physical manifestation, it’s easier for our minds to wrap around a disease that hides in the brain, making a person do completely illogical things. If it’s a monster doing those things to our child or our spouse or our friend, the abstract becomes concrete. Asking, how do I fight for someone with an eating disorder, becomes a statement of war, not a hopeless gesture. We can begin to throw punches.

For Ella, the first help for her daughter came in the form of her daughter’s friend, who brought his concerns to a teacher, who in turn talked to Ella and her husband. For Benj, his first punch was the information his nutritionist friend gave him.

But then it gets harder. Where to next? Ella began asking questions. She asked two of her friends whose children went to another school if they knew of any mom who also had a child with an eating disorder that she could talk to. Her friends told her that no one at their school had an eating disorder.

No one has an eating disorder

In lies the problem in finding help. No one talks about having an eating disorder. It is a secret disease. No one wants to admit it. No one wants to get help. Because ED wants it that way. And what ED wants, he usually gets.

Until you show up full on ready to fight.

Ella finally found a therapist for her daughter. Their journey toward healing began. But what Ella soon learned is that fighting an eating disorder isn’t linear, with a timeline and a “recovered” date. Their journey lasted about 3 years, from finding ED to fighting ED to finishing ED.

Benj and my story was a 17 year journey with ED.

No Journey Toward Recovery is the Same

But what all journeys do have in common is the devious monster known as ED. The unknowns, the frustration, the anger, the feeling of helplessness – this is the journey of anyone who walks alongside someone with an eating disorder.

A hard truth in the fight against ED is that the local hospital is not going to be the answer. Although the facilities that fight ED are a blessing, they are not located in every city. You may be forced to send your loved one far away from your home. But like Ella, like Benj, you need to keep your end goal of finishing ED’s reign in mind, keep what is best for your loved one front and center.

Put Your Why Front and Center

The process of recovery is going to hurt in many ways. Sending your loved one far from home seems cruel. But if the end goal is getting rid of ED, you need to be willing to do whatever it takes to help them.

Because you love them.

You do in the short term what will rid you all of ED in the long term. Like Ella said, the fight against an eating disorder doesn’t have a timeline. There will be setbacks, some steps forward will be only measured in centimeters, but every step in your journey is a step you need to take in order to understand the ED better, to know how to fight him better, and maybe, every step is how you are going to help someone else in their own journey some day.

So, don’t hold on to your journey like it’s a secret to be ashamed of. Take it as a responsibility to help another person who doesn’t know what to do.

Somewhere out there is a person asking, how do I fight for someone with an eating disorder? You may be a resource for a mom who doesn’t know where to turn. You may be the first step in a husband’s journey to fight ED. You may be the hope a friend needs in knowing that ED has an expiration date.

Share your journey so others know how to fight for their own.

How Do I Fight For Someone With An Eating Disorder?

Take advice from Ella, from my husband, from me, and from others who have fought ED and won:

Your loved one depends on you, even though they may not know it yet. So you need to depend on God. Because you won’t be strong enough on your own either.

I am praying for you in your fight. Because I know first hand what God can do. I saw, after the fog cleared, that I would never have gotten to where I am now without the love of my person. God knew I needed him.

Be your loved one’s person. Let God make you strong enough to fight for someone with an eating disorder.

I want to thank Ella King Herlihy for sharing the journey she took with her daughter as they fought her daughter’s eating disorder. The more who share, the greater our success will be. You can find Ella on Facebook to join her group UnEntitled Parents: Propelling Teens Toward Responsible Adulthood.