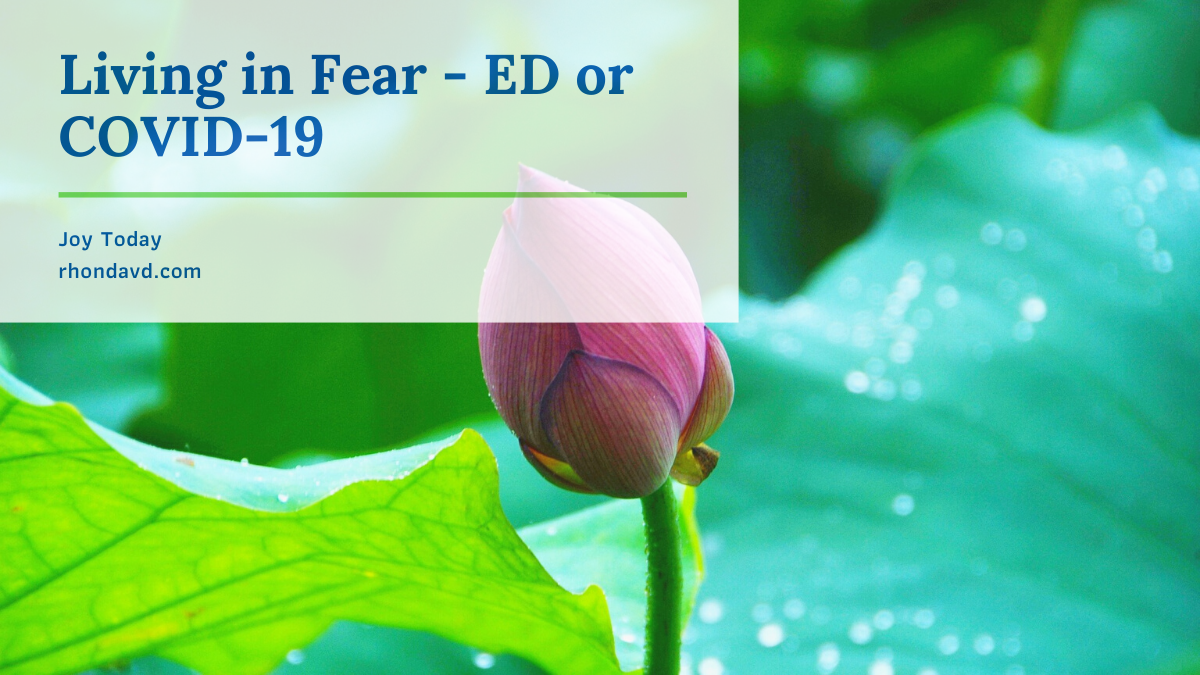 I spent a large portion of my life living in fear. I didn’t realize it was fear while I lived it. I thought I was being careful. I thought I was making smart choices to avoid the bad ones. I thought I was living normally while watching every step I took. I only saw my steps, never the beauty in the journey. Because each of those steps I took needed to be carefully placed in order to appease my ED and stay within the rules and restrictions of my eating disorder.

I lived in fear. I know this now. I feared gaining weight. I feared losing control. I feared not being good enough. I feared feeling worthless. That’s how I lived and I didn’t know any different. That became my normal.

Until someone gave me the sight to see how not right my eating disorder actually was. I recognized my lifestyle as one carved out of fear, and when I found freedom from that fear, I suddenly knew what it felt like to actually live.

Fear in the Unknown Future

The past couple of months have reminded me of that feeling of living in constant fear. Living in quarantine from COVID-19 reminds me of when I made every choice with the sole intention of avoiding that which I feared. When this quarantine first happened, when I saw the news and the empty shelves at Walmart, the new rules and regulations in place, the precautions the government told us to take – I allowed fear to sweep over me. I panicked a few times, scared of what we didn’t know.

You guys know – our lives have been lived one day at a time because none of us can control the future. COVID-19 has driven that point home loud and clear.

But I remembered living in fear. I remembered when I lived in fear I lived paralyzed to move forward, and so I made the changes necessary to live in freedom from my eating disorder. I don’t want my life ruled by fear of the unknown. ED kept me constantly afraid of the what ifs and the unforeseeable future. ED made sure every decision I made was tainted by my fears so that he could remain in control of my actions.

My fear allowed ED power over me.

I do not watch the news anymore. I refuse to allow the media to instill fear in my heart so that every decision I make is tainted by fear of the unknown. That doesn’t mean that I don’t take the precautions necessary. I don’t ignore the reality of COVID-19 in our lives. Just like I don’t ignore the reality of an eating disorder. But I also refuse to allow it to control me.

How to Let Go of Fear

In the beginning of recovery, it was very hard for me to let go of that fear. Would ED come back? Would I be able to fight the urges of my ED? Would I ever be “normal”? Fighting fear is a constant and consistent battle. It is a mindset that needs to be continually readjusted and realigned with truth.

Just this morning when I was at Snap Fitness, one of the TV’s showed one of the morning news programs. The caption at the bottom of the screen said, “The Do’s and Don’ts of Wearing a Mask”. Please hear me – I am not rolling my eyes at the need for masks in certain situations right now. For some masks are a must. But the media drowns us in fear – they tell us we have to make sure to wear the right mask in the right way in the right situations . . . and if we don’t, the implications are cast into the fear of the unknown.

Use Logic, Truth, and Trust

Fear becomes the reason why we do things instead of wisdom. When ED was calling the shots in my head, he erased all logic. My choices were not logical by any stretch of the imagination. When I learned how to use logic again, at first I needed the help of wise and logical friends. But as I got better at recognizing truth on my own, I could make logical choices on my own.

I don’t need the media to instill fear in me. I need wisdom from truth seekers to educate me and help me find logic in the mayhem. I want to make wise choices based on truth, never based on fear. I don’t live by fear. I live by faith in an all-knowing God. He created me with a mind, heart, and soul – to think, feel, and trust in Him.

So how do I wade through fear when the future is unknown? I find truth-seekers rather than fear-builders. I surround myself with logical minds rather than minds swamped by fear. I steer clear of triggers, but when triggers stand in my way, I put on the armor of God’s truth and love. And I trust that God holds all things in his mighty hands.

That doesn’t mean I make stupid decisions just to go against the crowd. I don’t fall back into unhealthy patterns to feel secure. That means I think. I use my logical mind. I follow the rules set out for me when that means keeping others safe as well. I trust in God’s faithfulness and compassion which are new every morning.

Fighting ED taught me these skills. These are life skills I lacked, but through recovery I’ve needed to hone them into place. Who knew the carryover from recovery to other parts of life would be so monumental.

God is Greater Than Fear

I don’t like living in fear, and once I found my way out from under the dark cloud of that ED-induced fear, I embraced the freedom of using the logical mind God gave me. I embraced him for helping me remember what joy can do in place of fear. The unknown always unfolds itself into reality, but while we’re living in the middle of it – whatever that unknown time may be – we can rest in his capable and all-knowing hands. We can move forward trusting in his guidance.