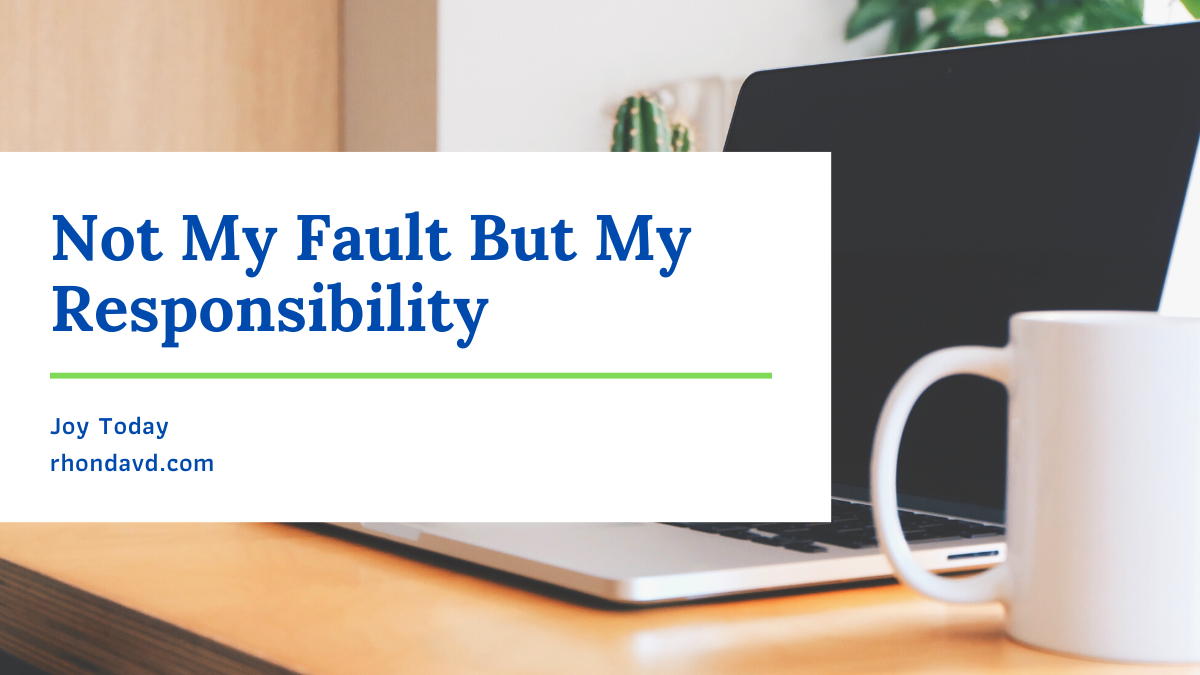 I had to fight it. No one else could do it for me. Not my fault. But my responsibility.

It’s so easy to pass the buck. Make it someone else’s problem instead of our own. The words, “It’s not my fault,” too quickly equates to, “So I don’t have to do anything about it.”

Cleaning up puke is not my favorite. I could have woken up my husband and made him do it. But it wasn’t his fault either. It wasn’t even my son’s fault. It just happened. Life happens. It’s our responsibility to handle it.

Math was my hard subject. I have students now who complain that Spanish is too hard for them. They just can’t do it. Studying is hard. The homework is hard. Learning the words is hard. I will agree that learning a language may not be second nature for them; it may in fact be harder for one than it is for another. But even though it isn’t their fault the way their brain is wired, it is their responsibility to deal with the hard and face the challenge.

Bad drivers that cause me angst share the road with me daily. But how I react to them is my choice. Yeah, I can get annoyed, frustrated, or angry, but my emotions are no-one else’s fault. I can blame the bad-driving actions of another, but still, it’s my responsibility how I respond. My emotions are my own, my responsibility.

We can make all the excuses in the world why it’s too hard. It’s not fair. It wasn’t my fault. But here it is – suck it up and deal with it. Take responsibility for the life you live.

We are an excuse-making people. It’s so much easier to feel entitled. I didn’t make the mess, so I don’t have to clean it up. I didn’t ask for this problem, so I can simply wallow in it. I didn’t ask for something bad to happen to me, so I’m allowed to lose control of all my emotions and blow up.

I will admit I don’t always handle my responsibility well. Case in point: I started working through an online, self-paced class to help me build my blog professionally. But when I ran into a unit that I couldn’t figure out, I got mad. I got frustrated and annoyed. I complained that it was too hard. I bemoaned the fact that I was too dumb to figure it out. I whined that I didn’t have anyone who could help me. So I quit. I simply gave up.

It was not my fault that I struggle understanding technology, but it was my responsibility to suck it up and find a way to solve the problem. I could have done more research, hired someone to help me, gone online to look for help, used the Facebook group for the class to ask questions, but I didn’t. I decided it would be more productive to act like an entitled baby and give up on my dream when things got too hard.

The problem I ran into was not necessarily my fault, but it was my responsibility. If I want to succeed and move forward, I need to stop making excuses. I dropped the ball and stopped being responsible for my actions.

Picking that responsibility back up again is a hard next move. But no one promised me easy all the time.

I praise God everyday that he gave me the determination to fight my eating disorder. If I had made excuses my MO during recovery, I would still have an eating disorder. I know that for a fact. Too hard, too tiring, too time consuming, too much to handle. All those excuses would have equalled too entitled to take responsibility for my recovery. And that is when getting stuck happens.

Getting stuck, like I got stuck in my blogging class, equals giving up. I’ve already written about defeat. Defeat is a mindset. That is not where we can let ourselves sit.

I felt defeated in my blogging class and I quit. And starting up again has been difficult. Changing my mindset about my failure is a hard road. But . . .

Nobody promised me easy.

Hard is not always my fault, but it is my responsibility. I don’t want a mindset of defeat because it’s hard to dig myself out. But right here is the pivot point: I could decide to stay defeated because it’s easy to lay there in the rut. But what will I accomplish flat on my back in the mud?

So, doggone it, now I have to try to figure out my blog because I just made the point to myself. I don’t want to live in my excuses. That’s not who God created me to be – an excuse-making-giver-upper. He created me as a never-giver-upper. A redeemed child of the King.

Redeemed for a life of more.

He is more than my excuses. Even if those excuses seem logical. People might even make excuses for me, feel sorry for me, agree that it’s just too hard. They feed my entitlement, make me feel justified in defeat. But those people aren’t helping me take responsibility. They are helping me pave the way to a fault-finding, excuse-making lack of responsibility.

So, my friends, here’s the hard word. Don’t make excuses to give up and lay in defeat. No matter how much it sucks, and how much you don’t want to take responsibility for a situation, you have to. You have to be more. Do more. Reach for more.

Don’t spend your life looking for fault and pointing the finger anywhere but at yourself. Be courageous enough to say, “Yes, this is my responsibility and I own it.”

Own it. Take the hard step. Move forward. Take responsibility for every action you make, whether it’s your fault or not. Because you are strong. And God made you for much more than this.

One thought on “Not My Fault But My Responsibility”