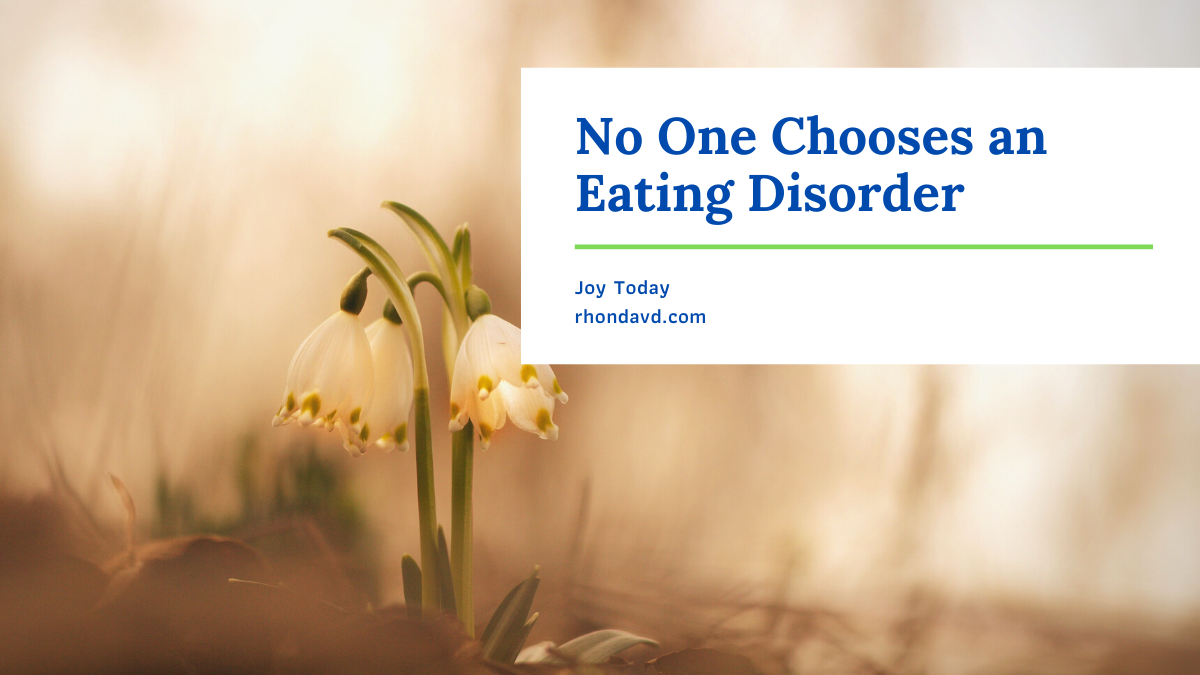 I think many people make the incorrect assumption that a person chooses to have an eating disorder. We choose to stop eating. We choose to live by illogical rules. We choose this life of misery simply because we want to be skinny.

Who chooses to get cancer? Or chooses diabetes, or kidney stones?

No one chooses a disease that takes away their freedom, sanity, logic, relationships.

But the fact undisputed remains: an eating disorder is not a choice.

So why do others whisper, look the other way, ignore, gossip? Why do they assume, “She just wants to be skinny”? Why do they say, “Why doesn’t he just eat”?

It’s because an eating disorder is a misunderstood disease. Misunderstood means people make up their own explanations based off of opinion, assumptions, hearsay, imagination, movies . . . Basically, they make it up to make their world make sense.

It’s easier to make it up than to research the facts. Not until you come face to face with the disease, until it becomes your own reality, does make believe stop working. Then it becomes the disease that it is, and you are thrust into an unwanted fight for your life. Just like cancer, like a heart attack, like a stroke. Those who have ever had a life threatening disease understand deeply what that fight for the life you once had is like.

No one chooses an eating disorder.

There is no medicine. No definite procedure. Fighting an eating disorder is fighting the voice in your head, fighting the illogic that has become your truth, fighting an unseen and manipulative enemy.

Fighting an eating disorder means relearning what is true and what is false. It is constantly battling the voice in your head that has fed you lies for so long that you have come to believe those lies as hard truth.

This is why fighting an eating disorder is so hard. You can’t see your disease on an xray or in a surgery. It’s not visible because it’s a mental disease. It lives in your brain, eating away at your physical form while tunneling deeper into your mental. It makes your actions illogical and unreasonable, further causing people to feel confused and frustrated with you.

Confused and frustrated by you, when they should be directing those feelings toward the actual disease.

And so it is with an eating disorder. The actions of the person make it seem that they should be to blame for the illogical things they do. We want to take our frustrations out on the person for not eating, for hiding away, for withering to nothing. But it is not the person who is making the decisions. It is the eating disorder.

And that goes against our cultural standards of using the evidence to place blame. Of course outwardly, the evidence is the actions. She is not eating hence she is to blame. It appears to be her own choice.

It is the eating disorder changing his personality, stealing his joy, hiding his real character.

No one chooses an eating disorder.

But as I said in my last post, an eating disorder isn’t our fault, but it is our responsibility.

I know, dear one, you didn’t choose this. But you must fight it. Speak strongly, speak loudly, speak freely about this disease that you are forced to fight. Because if you don’t speak out, then others will continue to be ignorant of the strength you must possess to fight your battle.

An eating disorder will continue to be misunderstood unless those of us who have experienced it are willing to share our stories and experiences, to explain the battle, to help others grasp the severity of the disease.

Speak to one or speak to an auditorium, but in speaking, you are inviting empathy, inspiring hope, and giving direction. You are showing that though you didn’t choose this, you are choosing to fight.

No one chooses an eating disorder. But you have the tenacity to choose the fight.

This is our battle cry. Don’t be ashamed of the fight you are waging. Be strong in the knowledge that you refuse to roll over and allow ED to rule your world. By speaking out, you are gathering an army behind you. You are winning others to your cause, because when they understand, they will want to fight with you.

No longer will they point fingers and whisper behind their hands. Rather, their eyes will open, and they will reply with an “Ohhhh, now I get it . . .”, and they will stand with you until your ED is in chains.

Don’t fight on your own – no battle should be fought alone. Cancer, diabetes, heart disease, kidney stones . . . or an eating disorder. In all our battles we are stronger together. Only in vulnerability and openness can we come together under a common cause. Only in understanding can we hold hands as a united front.

God made us for community.

Do not let a disconnect separate us from community. Allow empathy to reign, so in all our battles, we see each other, we understand each other, and we fight together. Because the hardest battles are the ones we don’t choose.